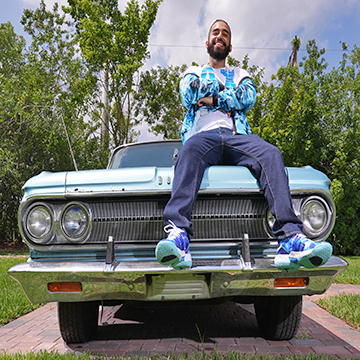 Tony Valor (born August 27, 1996) is an American singer, rapper, songwriter, record producer, actor, director, entrepreneur, and a motorcycle enthusiast. At the early age of 21 Tony lost his father Antony Valor. For the last decade of Antony’s life, the two worked inexhaustibly to bring up the family business, a record label that Antony had started in the late 1970’s “TVI Records & Filmworks”. Tony started off as just an artist working with his father. After Antony’s passing (2018), Tony became head of the label and created new subsidiary companies “TVI Multi-Media”, “TVI Philippines Consulting Agency”, & “TVI Music Library”. Till this day he has 4 artists signed to the label TVI Records & Filmworks including himself. Tony has been inexhaustibly determined to keep his father’s legacy alive and to do what he loves most, creating music. Under his label he has a reggae artist called “Vadah” aka “Da Kraken”, a Reggaeton/Latin artist called “Gaby B” and a Hip Pop/Rap artist called “Judan”.

Tony has burst onto the music scene with all the energy of his youth. Armed with his rich family history in the music industry, Tony is making a “name” for himself as a singer, songwriter, and producer. Tony is a native New Yorker now living in Broward County, Florida. Being of Sicilian, Chinese and Hispanic descent he has a unique multicultural background.

He grew up listening to a cornucopia of music styles and was particularly into Led Zeppelin, Mac Miller, Biggie Smalls, Benny Goodman, and, of course Pop, Hip-Hop, and R&B. Of today’s artists, Tony listens the most to DaBaby, and like other modern figures, desires to forge a career that straddles the border between Pop, Hip-Hop, R&B, Reggae, Latin Urban, & Dance. By the age of 9 Tony’s mother got him his first instrument, an acoustic guitar. This is where Tony first discovered his passion for music. Not long after learning how to play the guitar he joined his middle school jazz band. Shortly after, Tony started to have some conflicts in school which led him to get in trouble. At 14 years old he was kicked out of his house and slept in the streets for a couple of nights before he could reach his father Antony. After being able to reach him, Tony went to go live with his father. Antony showed his son the ways of his business and entrepreneurship. Tony has taken his exposure to music & entrepreneurship and developed it into a serious career in the music industry.